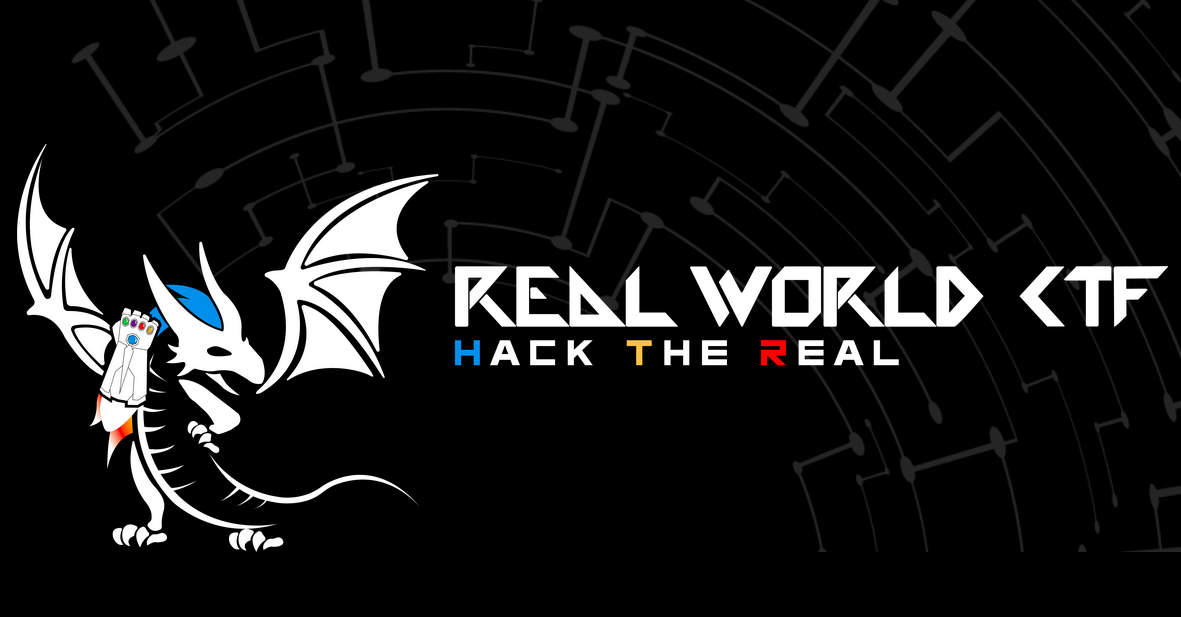 During RealWorldCTF 2022 there was a RE challenge named “Ferris Proxy”. The challenge includes 2 executables (client and server) and a TCP packet capture file (pcap) that contains data of communication between the client and server.

Our team (xSTF) did not solve the challenge on time but I decided to make a writeup anyway because the challenge was fun and mixed multiple categories besides reverse engineering such as network analysis and also cryptography.

In resume the challenge requires to reverse engineer client & server, understand the protocol and find a way to decrypt the traffic. These type of tools are commonly used by people from countries with heavy internet censorship and monitoring (such as China) however they may introduce flaws that could expose citizens traffic or browsing history when being used with, e.g. standard configurations, default keys, flawed cryptography etc.

Fortunately the ELFs were not stripped and the debug info is included to assist while reversing the binaries.

By having a look at strings we read some references to the tokio-rs library/platform used for the Rust 🦀 programming language.

On the flag.pcap file we notice the 3-way handshake, both source & destination ports and also the TCP data (unreadable).

Since the first SYN is sent from a seemingly random high port we’ll assume the the client started the connection and the server is listening on port 8888.

To understand what the client and server are supposed to do we execute both on virtual machines and observe their behavior by analyzing dynamically. We start by running the client:

This error means the client tried to connect to server but since it is not running, it couldn’t connect and exited so we must start the server in first place. In fact the ss utility confirms that server is indeed listening on 8888 for TCP connections.

After playing with the programs a bit we realize the client also starts listening on port 12345. The output from ss is the following:

In general this is more or less what it looks like. Note that the packet capture originates from client and is proxied into server before reaching its final destination. Technically it works like a tunnel.

The proxy may be tested with, for example, cURL to inspect how it handles incoming connections and how it forwards to server:

Digging a little bit deeper analyzing the client binary statically we find out some interesting things. 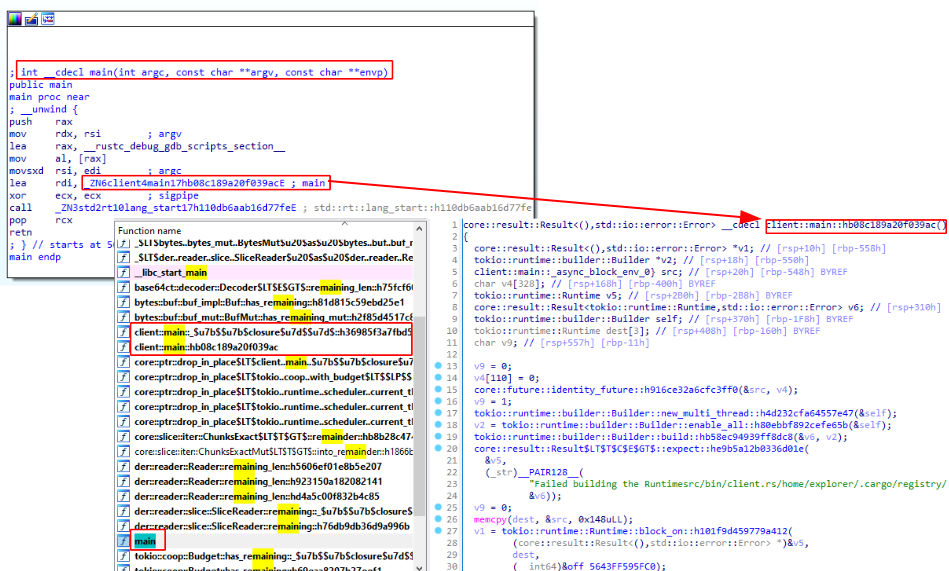 After all the tokio runtime stuff has been initialized we reach the client::main function where the actual program begins.

One of the first things to do before the client starts listening and forwarding TCP to the server, is loading the configurations from a YAML string embedded in the executable because there is no additional file. So we see a call to serde_yaml::from_str that parses the following YAML string: 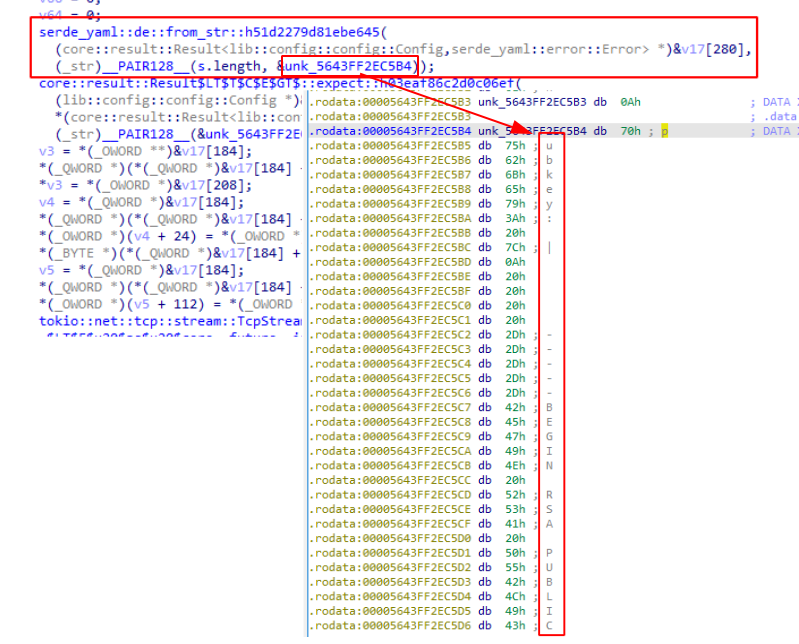 This is part of a RSA PUBLIC KEY. Extracting the whole string from client gives us the following string:

The public key on client should belong to server and vice-versa (assymetric key cryptography). Note there is an additional value for mkey.

Going further on client::main we find some references to TcpStream::connect and lib::protocol::rc4. In resume, this function is responsible for handling TCP streams RC4 encryption & decryption. 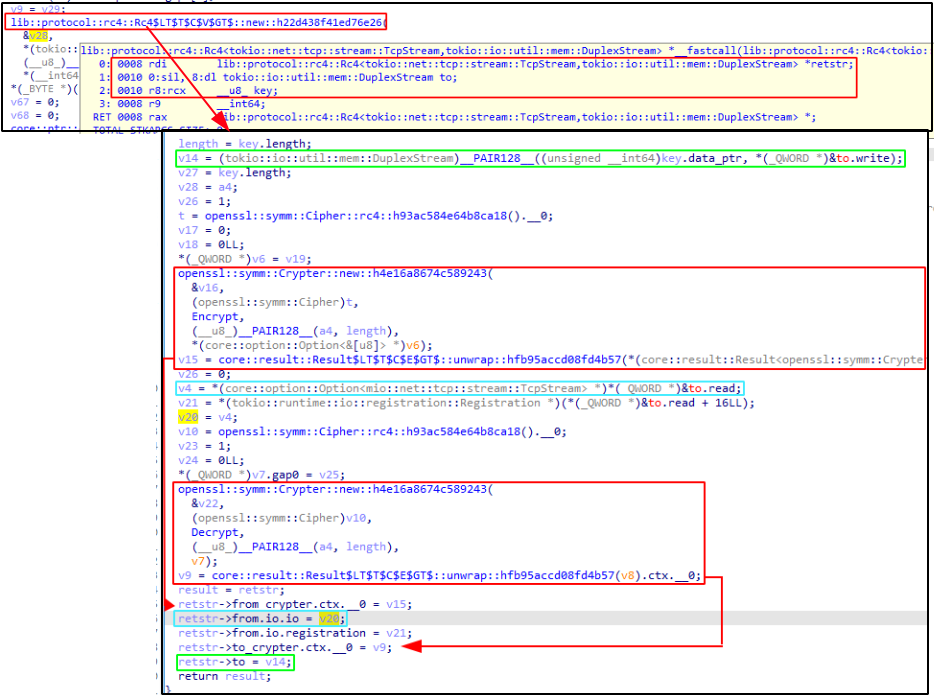 By placing few breakpoints in the context of process_transfer function we can read the RC4 key from memory and it does match the mkey value from YAML file: 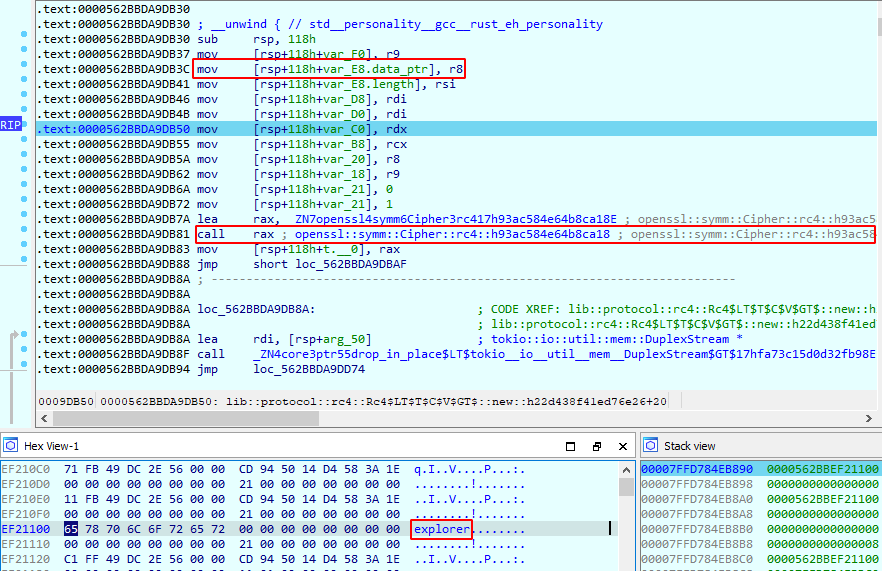 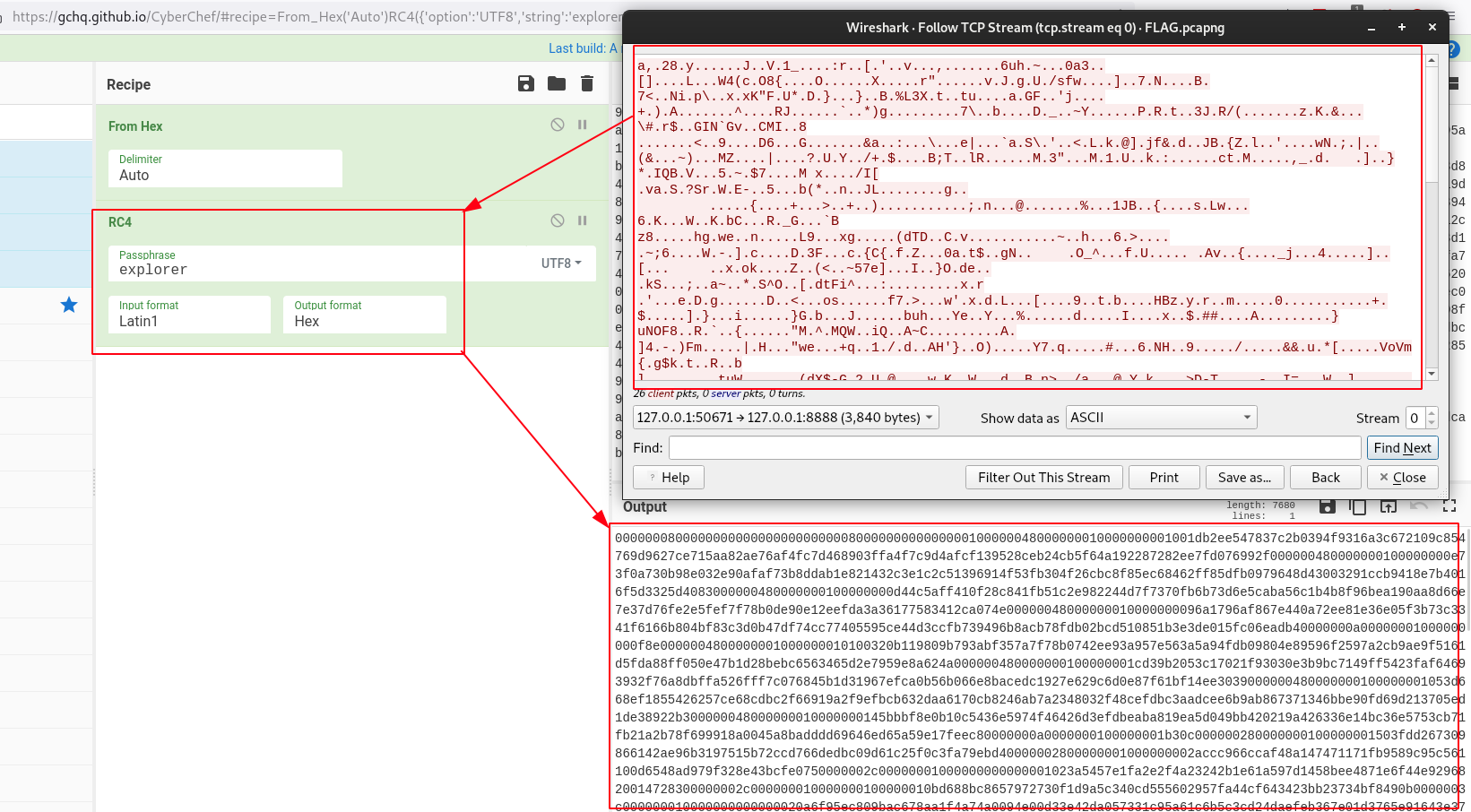 Note the decrypted data is still unreadable. Since we know there are RSA keys it means it could have additional layers of encryption. However, there are some leading zeroes visible at the beginning of the RC4 decrypted data.

If we start by splitting each 4 bytes we can observe a pattern:

After splitting the “metadata” (fields with a lot of zeroes) from the actual data and aligning them it looks like the following:

In order to really understand what those values preceding the actual message mean we should look at what is being written into and read from sockets.

The first value is the length of everything succeeding. For example:

However there are still two unknown fields (the 2nd and 3rd column).

At the very beginning of client::process_connection, whenever the client receives an incoming connection and before forwarding to the server, its capable of doing multiplexing. This means multiple users may use the client simultaneously while it do use the same established connection with the server. other words, multiple client requests are tunneled over the same client-server connection and there must be a way to handle them in order to deliver the responses to the correct users: lib::protocol::mux.

In the following image we may observe the id being mapped into a stream, stored in a HashMap and then being incremented by 1 for a future stream: 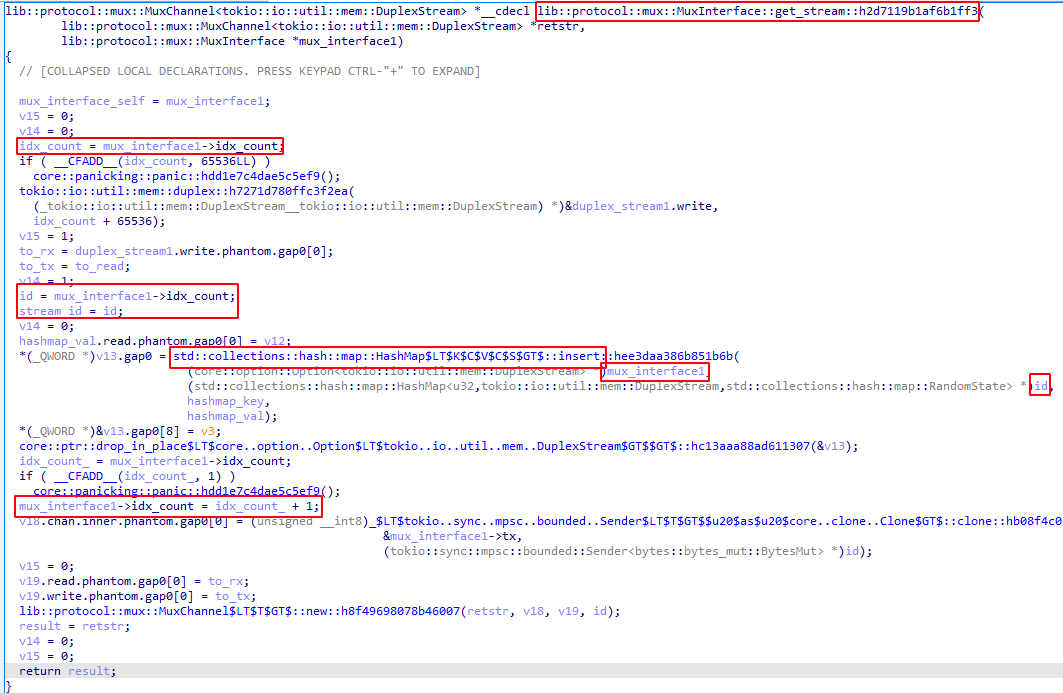 If we perform multiple cURL requests for example, each one will have a distinct stream id and the value is reflected on the 3rd header field to keep track of which stream belongs to which user: 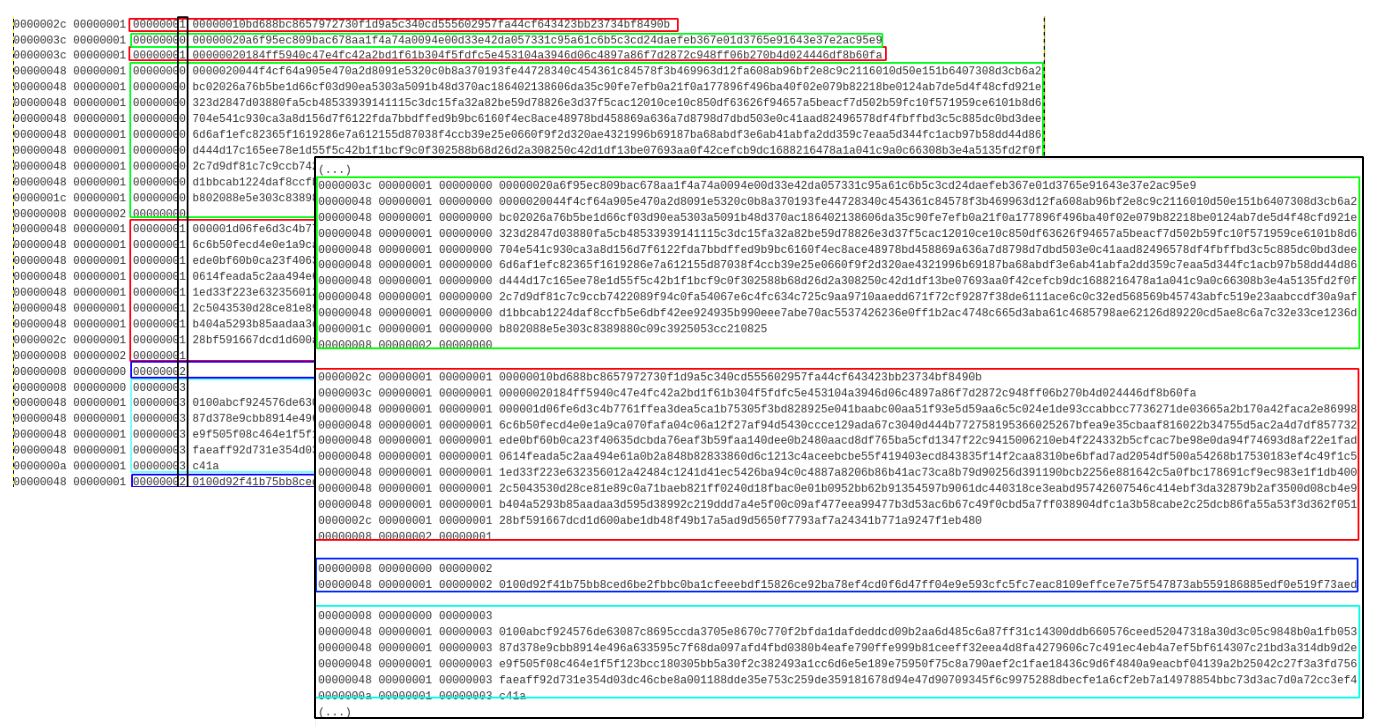 Regarding the 2nd header after demuxing we can see it has basically three distinct values: 0, 1 and 2 translate to: 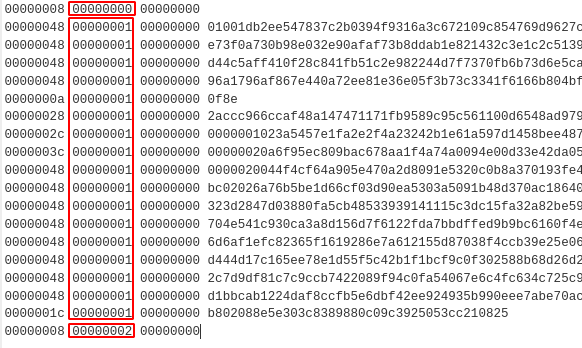 Another important step before decrypting the transmitted message is to find out the actual key. RSA is used to perform a key exchange between the client & server that is further used to encrypt the stream.

It begins by initializing a random number generation utility rand::rng::Rng::gen and feeding into rsa::key::RsaPublicKey::encrypt. Basically it RSA-encrypts an array of 16 randomly generated bytes using server public key (the server does the same with client public key). 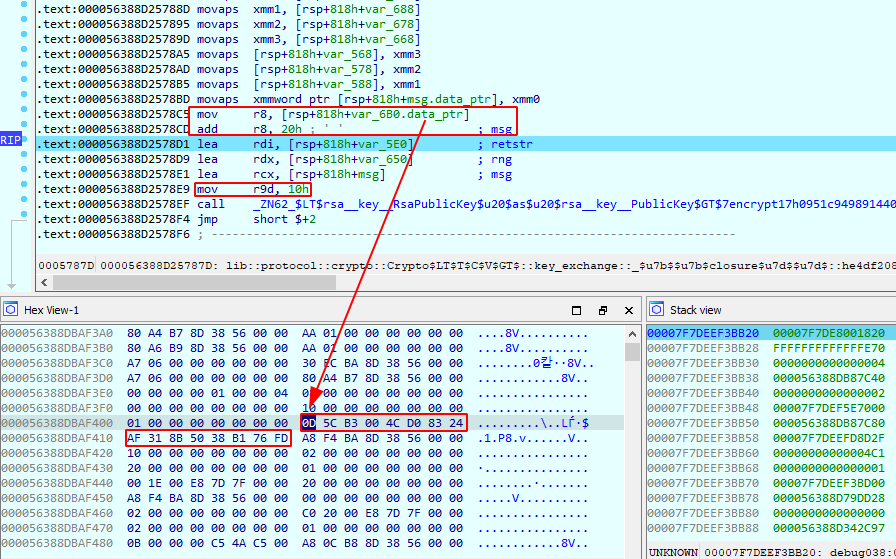 We are able to inspect the 2048-bit ciphertext in memory during runtime. 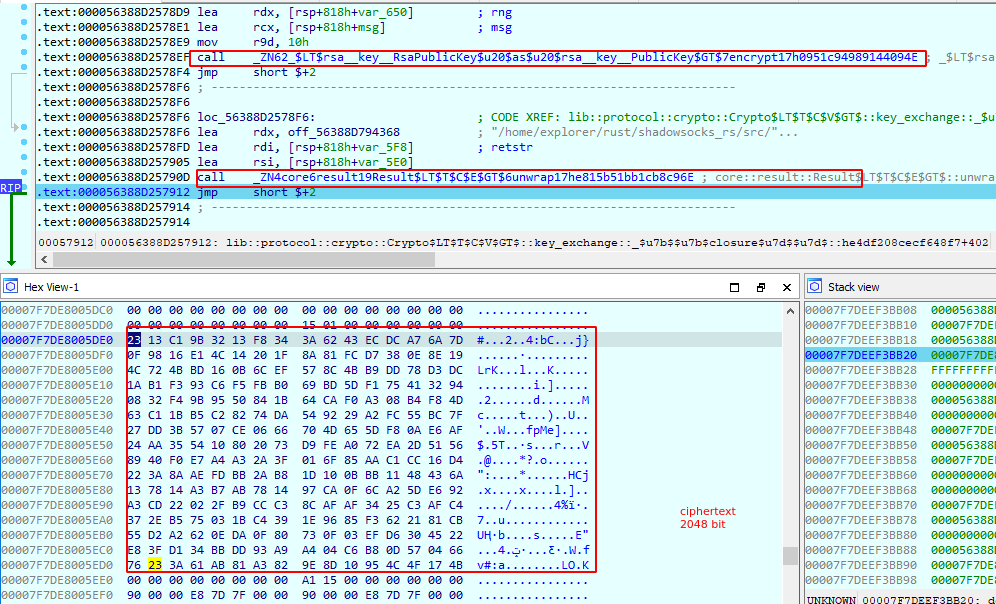 For sanity check we grab the server private key that is embedded into the server executable and try to decrypt the ciphertext. As a result we see the plaintext matches the client generated 128-bit key. 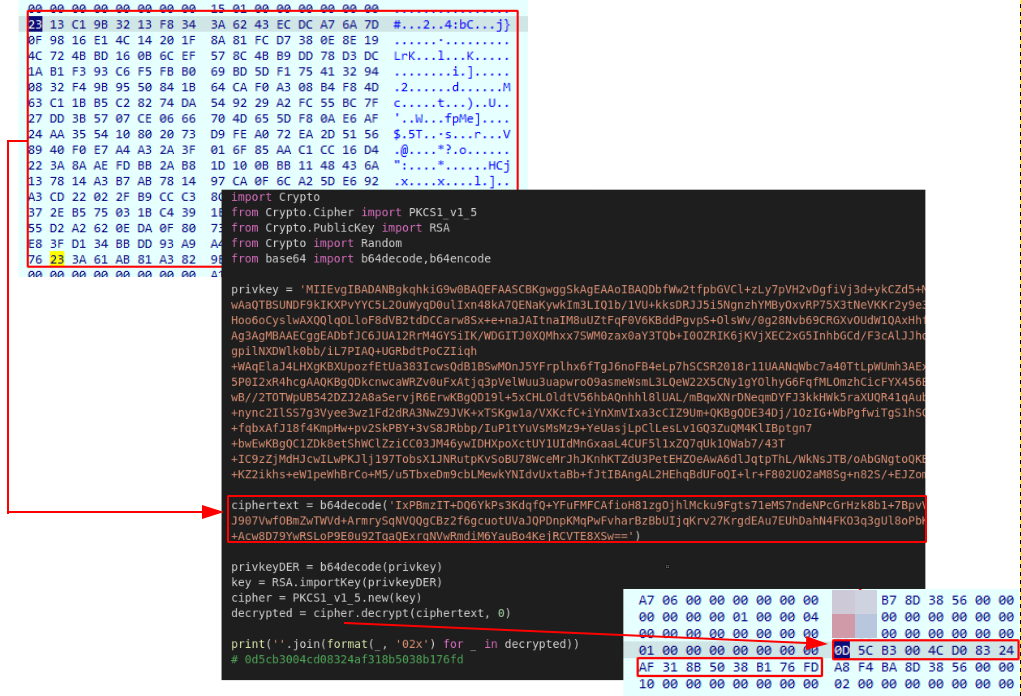 After the keys are exchanged they must be verified by both ends to ensure each one received the correct key in order to proceed to with communication. But first there is an additional operation that takes both keys (i.e. the key generated on client and the key received from server). It starts by zipping 16-byte arrays and then mapping XOR function to each pair resulting in a session key. 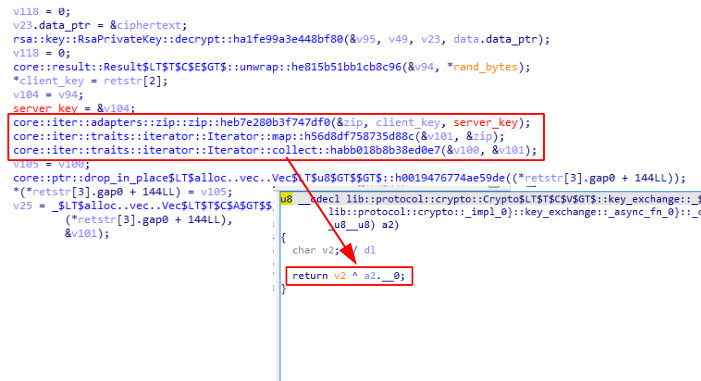 The Python equivalent of this operation would be something like the following:

When the session key has been derived both client and server calculate its respective SHA-256 hash digest (openssl::sha::sha256), exchange it and compare to ensure both have derived the same key. 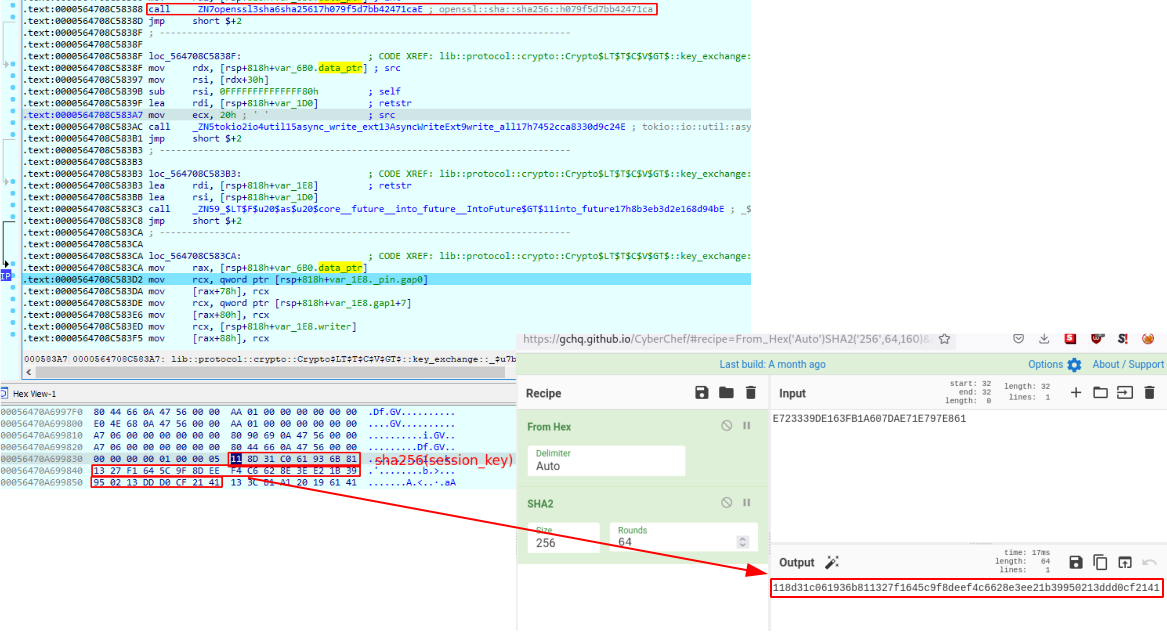 From this point and considering all the steps we just went through it is trivial to decrypt the pcap contents. After the session key hash has been succesfully validated by both client and server it starts by encrypting with AES-128-CBC mode using the derivated key from the previous section. 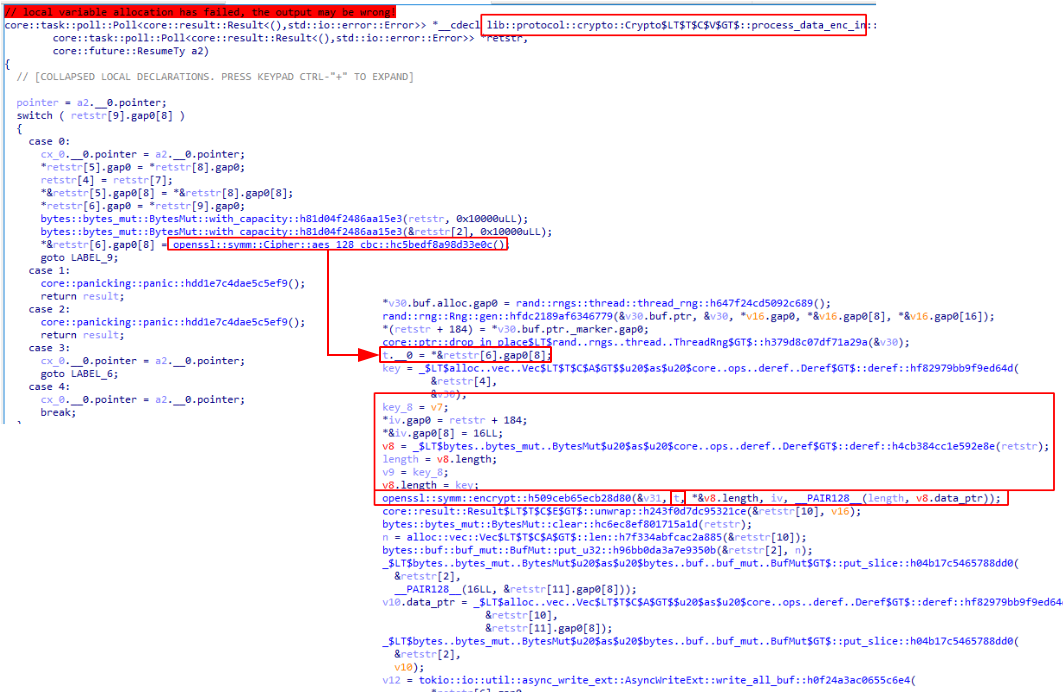 Continuing the previous example and after getting the whole TCP stream from Wireshark we may try to decrypt using the parameters we found. Consider the following silly Python script to dump client -> server packets:

It will output the following results:

Some things we may observe in the protocol:

Now let’s try to decrypt the data using the key we got previously and confirm it works! 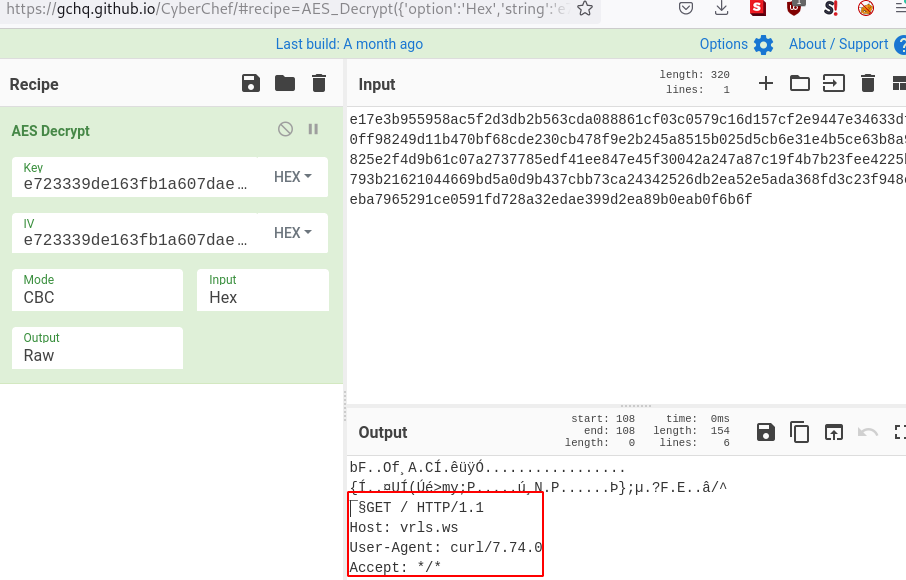 To get the flag we just need to reproduce the same steps but using the actual FLAG.pcap from given for the challenge.

1 - De-multiplex the streams (there are 4 distinct streams on FLAG.pcap) 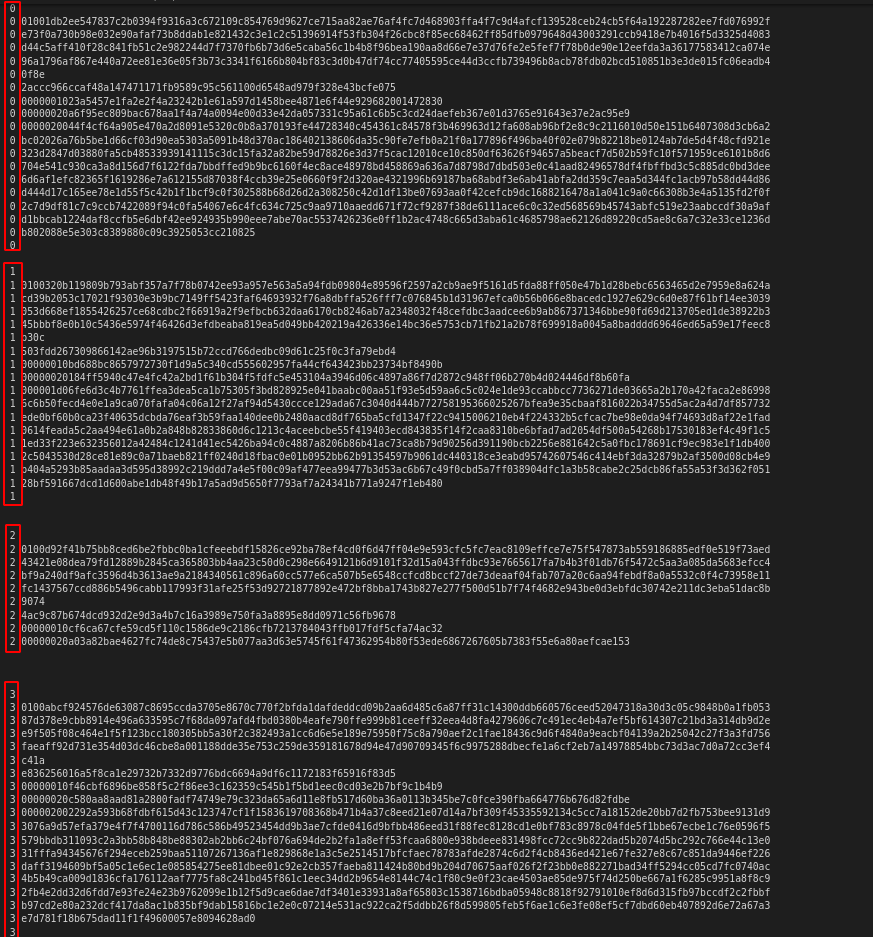 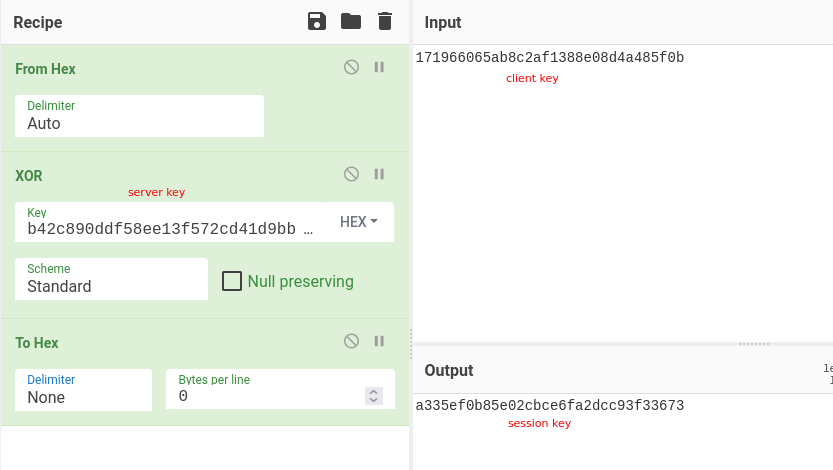 4 - Repeat and decrypt the remaining messages using AES-128-CBC mode with the derived key, per stream, until we eventually reach the flag 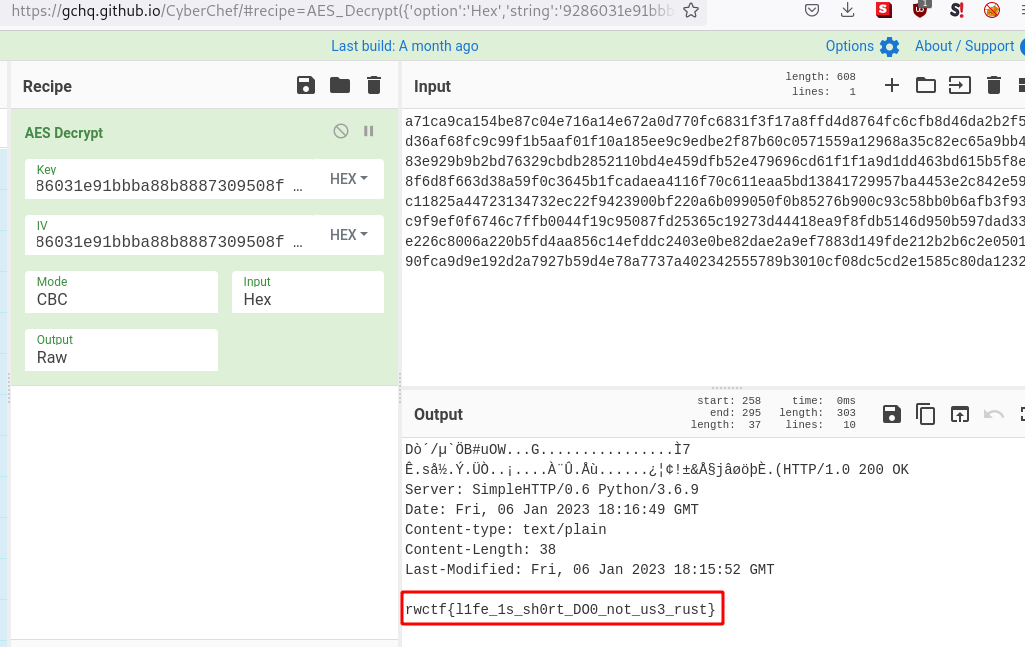 Finally, in very generic terms and after several hours of reversing, the main program flow is similar to the following: