This challenge was presented at DragonCTF 2020 organized by Dragon Sector, a capture-the-flag team from Poland. As the description suggests, we are given an executable that works on AmigaOS 3.x Workbench which is an operating system released in 1993. It was the operating system shipped with the Commodore Amiga 4000 (A4000) desktop computer whose CPU is supported by 68k (Motorola 68000) architecture.

The challenge was solved by me and my teammate @AndreCirne from xSTF.

Disclaimer: Emulation wasn’t required at all. In fact, the flag could be obtained just by examining and reversing the binary file. However, we wanted to play a bit with the emulator and try to execute the binary.

The emulator used was FS-UAE Amiga Emulator and works on Linux. It has a lot of configurations that enable users to tweak and customize Amiga. There’s also an entire scene around retro games forums that offer a lot of resources and games to setup the emulator devices.

We found AmigaOS 3.1 Workbench in some old historical archive (and also a Kickstart ROM). These files were required to setup FS-UAE. When launching the emulator, we are presented with this cool window: 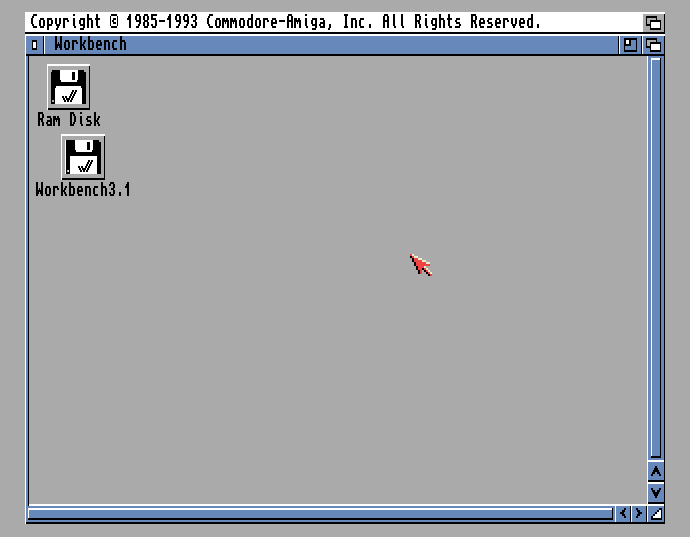 Now we had to figure out how to place the binary in our emulated desktop in order to execute it. The first thing we tried was to create a new hard drive with the retrozeit file but we couldn’t format it due to some errors.

After having a look at the file structure of floppy disk files (in particular, ADF files) we decided to create a floppy containing the executable. Since we didn’t want to start a project from root, we downloaded an open-source “Hello World” version from this GitHub repository (HelloAmi).

We managed to hack the Amiga Disk File and replace the executable binary with our own, retrozeit in this case, by changing a few lines of code both in .asm files from HelloAmi project and the .py script itself. The Python script is a wrapper for vasm M68k assembler.

After loading the floopy in emulator and executing it, we could wait ad aeternum for the flag to be calculated. Our goal is to understand how the calculation is performed so we can get the flag quickly.

We started by disassembling the binary in IDA. Ghidra seems to have a decompiler for this arch but it looked messy and couldn’t make sense of the resulting code. The principal functions (or subroutines) are the following:

We immediately thought that the flag characters would be printed one at time with possibly exponential pauses between them. This turned out to be false. No character was ever printed because the program was looping in retry_flag while check_flag wasn’t satisfied.

Once the button is pressed, it triggers the check_flag to verify the current flag in memory. If successful, the flag is then decrypted in subroutine decrypt_flag and printed to the user via set_text. 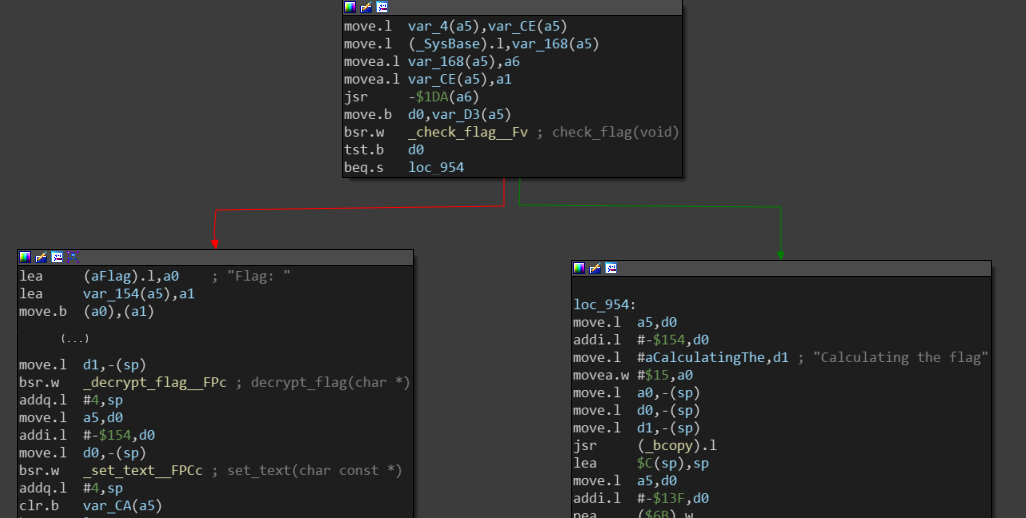 Note that tst.b d0 instruction will compare the d0 data register with zero. If the check_flag call returns false, then d0 will be 0 and will branch to the green line, loc_954 (aka “calculating the flag”), otherwise it will perform decrypt_flag.

We tried to one-shot the challenge by patching the binary and transform beq.s loc_954 into bne.s loc_954 to invert the condition. This modification would lead to decrypt_flag without performing any calculation (i.e., it would branch to the red line instead of the green one).

When executing the patched binary on our Amiga machine, it revealed an interesting string which we assumed to be the encoded flag: tzggaK/WdDtxwYllaWJ5CNuibFCPdxZrIsQokWN.

At this time, we knew it will need a little more effort. We started digging the assembly and translating to (kind of) pseudocode. We found that subroutines were working over two byte arrays:

In particular, decrypt_flag job was to iterate enc_chr array and perform bitwise operation ~(b ^ i) for every byte in in the array at index i. For example:

We still need to understand what kind of calculation is being done before we can actually decode the flag.

On the other side, check_flag verify that elements on enc_idx are ordered according to 2 constraints:

We just noticed a bit later that enc_idx was a unique sequence from 0x00 to 0x26. These were, of course, indices of the flag letters.

To satisfy the constraints, we must re-arrange the elements in enc_idx such that:

After re-arranging the array it should look like this:

Things became a little more obvious when we decided to analyze the behavior of retry_flag subroutine. In fact, all it did was a low effort swapping elements on random indices (hence the use of start_timer) and then check if the elements are ordered according to the restrictions mentioned above.

Of course, it would take a reeeally long time to eventually match the correct order of the 39 elements while randomizing it. Maybe even more than the average lifespan, so we wanted to find a solution.

At this point we knew it was a permutation and had to find the correct order of bytes of the enc_chr array. We started by trying to map the elements of enc_chr:

However it did not work. After decrypting the permutation it would still result in garbage flag.

Then we tried the inverse:

Still without success. There were not many more ideas left to test so we tried to “bruteforce” the prefix of the flag by hand (we knew the flag starts with DrgnS{ and ends with }).

In order to the first decoded character be D, the encoded enc_chr must start with 0xBB. Remember the operation of decoding the flag:

The byte 0xBB is at position 30 in enc_chr. We need to make a relation with chr_idx to get the correct index for each byte in the array.

The number 30 was actually the distance/displacement between the index of first byte in ordered enc_idx and the actual position of that byte in unordered enc_idx.

We got the flag on the emulator by patching the bytes on data section with the correct re-arranged array :)

Introduction During RealWorldCTF 2022 there was a RE challenge named “Ferris Proxy”. The challenge includes 2 executables (client and server) and a TCP packet capture file (pcap) that contains d...